Starting a YouTube channel is more than having a camera phone and an opinion. Today we want to share with you 5 successful RV YouTubers who have shared their biggest regrets from the road.

We all make mistakes, some bigger than others, and listening to these RVers share their stories can help make you a better RVer. Let’s get started!

Let’s take a look at a few well-known YouTubers and some of their biggest regrets from their adventures!

Sean and Julie Chickery run the “Behind The Wheel” podcast, but also a YouTube channel called Chickery’s Travels. These empty nesters are Air Force veterans who enjoy traveling at a slower pace and investing their time beyond the typical tourist stops.

They educate viewers on fun RV destinations, tips on RV living and DIY maintenance to help viewers make the most of their RVing experience.

In this video, Sean and Julie Chickery share their lessons from the road, but also their biggest regret, which was the purchase price of their RV. They bought a brand new RV and admit to not being good negotiators. They discuss that despite it not being a quick decision, it still got the best of them in the end.

Their lack of research and pre-pricing made them an easy target for a swift RV salesman. Not only was the purchase price of their new RV difficult, but also the long list of things needing repair on their new RV. They also admit they didn’t account for depreciation, which is huge.

They do share what they learned from this regret is to look at used RVs in the future. This will help save them from depreciation, but also previous owners get to work out the kinks in the RV. They also share resources to help know the value of RVs to make buyers more informed.

Liz Amazing is a YouTube channel originally run by Liz who hit the road in 2018. She and Paul met at a Washington campground and eventually became a couple. Liz broke her hand, which made it impossible for her to continue to travel. Paul moved into her rig to help her travel and has joined her channel ever since.

The channel separated itself from the many other RV YouTube channels because it was a single female traveling alone. Liz shares a valuable and unique perspective that isn’t often seen in the community. It will be exciting to see this couple grow together as they travel the roads together.

Liz and Paul a handful of their biggest RVing regrets in their video, “RV Life: Regrets | We would do it differently | Two years of Full Time RV Living. Despite being seasoned RVers, they still have their regrets.

Paul opens up about how he was paying $400 a month for storage on a classic car that he loved dearly. He stated his regret was not selecting a diesel pusher to tow a trailer that could haul his classic car with him.

Both Paul and Liz share how buying the wrong RV is a regret many RVers have. Many RVers buy their first rig but aren’t in it for very long. This is often because they get out and experience RVing and discover what they truly need while RVing. It can be an expensive regret if done wrong.

Having a Tire Pressure Monitoring System (TPMS) from the start is something they both regret. After driving across the Golden Gate Bridge with a flat tire, the couple is now passionate about tire pressure monitoring systems and educating others about their importance.

One of Liz’s biggest regrets was in regards to her Thousand Trails membership. She shares how she wasn’t familiar with Thousand Trails and because she bought a used membership it took months to transfer into her name. She could have saved a tremendous amount of money while RVing if she had started with this membership.

Their final regret as an RVing couple is that they wish they had done it sooner. They get envious of the full time RVing families and their kids getting to discover so many wonderful things at such a young age.

Tom and Cheri have been making videos on their YouTube Channel, EnjoyTheJourney.Life for the past three years. They live full-time on the road and use their channel to share their adventures, challenges, and advice from the road.

Two of their most successful series were when they purchased their new Grand Design Momentum toy hauler and dropped it on their truck. This skyrocketed their viewership and subscribers, but not too long later they had another series that performed well as well.

In the midst of the pandemic the couple rented a site at an RV park with a home owner’s association. The couple was regularly harassed and spied on by the management and it created a difficult living situation. The cops were called on one occasion, but the couple documented the entire experience for their channel.

Tom and Cheri share their biggest mistakes and regrets in their video “Biggest Mistakes & Regrets You Should Know! (RV Living Full Time).” Let’s take a look at what they wish could have been different.

Their first few biggest regrets revolve around not doing enough research before making purchases. Whether it was their RV, truck, or insurance, it’s important to do a sufficient amount of research. When you don’t do research before making a purchase, you often end up spending more money later to buy the correct item.

Several of their regrets revolve around money, whether it’s money saving tips or preparing to RV. Tom wished he had waited a little longer on his first RV because his credit was not good enough and he was denied a loan for his RV. The couple also says they regret buying a new RV because of the cost, but also the many repairs. They also wish they would have purchased their Thousand Trails membership sooner because it helps them save a tremendous amount of money.

The pandemic helped a lot of RVers discover the need to have a space of their own to call home. Tom and Cheri really wish they would have had a piece of land to call their own to setup for a few months during the height of the pandemic. It would have saved them money, but also helped avoid the frustrations they experienced at an RV park.

Phil and Stacy proudly served the military before starting their YouTube channel You, Me, & The RV. They’ve built their channel by giving honest and knowledgeable information, but also not being afraid to know when they aren’t knowledgeable in certain areas.

Phil and Stacy will have you learning about RVing, but laughing at the same time. They’ve inspired others to begin their adventures and try their luck with RVing.

Phil and Stacy of You, Me & the RV celebrated their anniversary of traveling by sharing some of their RVing mistakes and regrets. It may be because of their positive outlook and upbeat attitudes, but while Phil and Stacy, like many RVers, have made mistakes on the road, they only had one regret.

They share that their biggest regret was buying an extended warranty on their RV. Many RVers purchase these warranties and discover they’re worth slightly more than the paper they’re printed on. They are mostly a false sense of security while RVing as the conditions are often very restrictive. They haven’t used it and don’t plan using it in the future.

John and Merecdes of RV Odd Couple have been RVing full time for 2+ years with their daughter. They started their channel when they hit the road. Many of their videos are them sharing the knowledge they’ve gathered during their RVing experiences.

They cover multiple facets of RVing and have created a following known as their “Odd Squad.” Let’s dive in to see their regrets!

John and Mercedes share a mixture of advice and tips in their video “24 Months Full Time RV Living (Mistakes & Biggest Regrets).” Hearing them share their experiences and lessons learned is a great way to get to know this couple.

Mercedes has a few regrets from their RVing, which include not scheduling a daily routine, assuming they’ll be back in an area again and not creating a digital scrapbook of their journey. She also wishes they would have spent less time researching RV gear and instead spent the time investigating areas to stay. These regrets are great for new RVers to keep in mind as they prepare for their own adventures.

On the other hand, John has a few regrets from their RVing adventures as well. He wishes he would have bought less stuff, had a better work/life balance, kept a homebase, and not giving up his hobbies when he started RVing. John’s regrets are easily relatable to as many RVers give up everything to pursue the dream and evaluate what they truly need.

RVing is a great way to test yourself and grow new skills. These experienced RVers share a few of their regrets and mishaps in hopes that they’ll assist others in the RVing community.

Once you hit the road, you’re bound to have a few regrets. Learn from them and continue your adventures. What regrets do you have from your RVing adventures?

John and Mercedes of the YouTube channel RV Odd Couple have shared the good, the bad, and the… 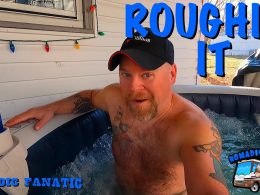 Quirky, honest, and a collector are a few words to describe Eric Jacobs of Nomadic Fanatic. Eric travels…
1 share
1
0
0 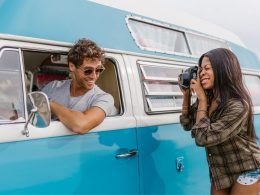 10 Up and Coming Van Life YouTubers

YouTube is the perfect place to learn about van life. You can find inspiration and implement new tips…
6 shares
5
0
1 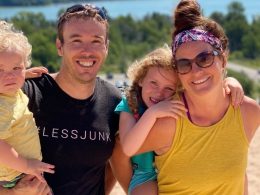 Who Is Less Junk, More Journey?

Nathan and Marissa made the decision to sell their 4-bedroom house in middle Tennessee and downsize, to pursue…