Home Blog Who Is Nomadic Fanatic?
View on YouTube

Quirky, honest, and a collector are a few words to describe Eric Jacobs of Nomadic Fanatic. Eric travels around the country in his RV named “Miranda” and with his cat Jax.

From his first YouTube video seven years ago, Eric has grown his audience, developed a brand, and created a life that people are interested in following along with.

He pulls no punches when it comes to people who trash talk him or criticize something he has done. That in itself makes him interesting to watch. He also loves Disney. He tries to get there every year.

One year he went for Christmas and New Years’ and had a new video out each morning about his experiences.

He also collects Disney memorabilia from thrift stores all over the country to display in his new base camp in Illinois.

The Backstory of Nomadic Fanatic

Seven years ago, Eric realized that he didn’t want to be tied down in the traditional way people are supposed to live…with a spouse, 2.2 kids, a dog, and a house with a white picket fence. He wanted to be free.

He said in one of his videos, “I know I was born to be a nomad.” He finds unique and interesting adventures when he’s traveling on American roads. Largest fork in America? Yup, he’s seen that.

Eric has no kids and doesn’t usually talk about his family. He does have numerous friends out on the road that he meets up with. He also travels with his weight-challenged Maine Coon Cat with extra toes, Jax.

Jax is his constant companion. When he’s away from the RV, Eric always mentions that he needs to get back to check on Jax.

How Long Has Nomadic Fanatic Been RVing?

It’s been seven years since Nomadic Fanatic struck out in his Class C RV from Washington State.

From fishing with huge magnets to eating burgers from coast to coast, Eric lives life to the fullest and shares it with everyone.

He started his YouTube channel after a month on the road. 200, 020 viewers later, he had literally grown up in front of his own camera.

What Type of RV Does Nomadic Fanatic Travel With?

Nomadic Fanatic’s RV named “Miranda” is a 2012 Class A Coachmen Mirada 35ES RV. Eric has tricked out this RV several times to make his life on the road more comfortable. It has two slides.

More recently Miranda has begun to show some wear and has had to have some repairs. Miranda is not his first RV. He had a Tioga motorhome at first.

Being a single guy on the road, Nomadic Fanatic has made Miranda into his traveling bachelor pad.

He replaced the couch with a recliner, took out the dinette and at one point put in a huge TV that blocked his window to play video games on, but recently, he took the TV out.

He has a sticker of Han Solo encased in carbonite covering his refrigerator and freezer doors. When he first got the RV, it had bunk beds in the middle. He took those out and created an office space. Jax has a cat tower there also, just to make sure Eric is working hard.

Eric wanted to wash his own clothes and felt an off-grid washer and spin dryer was a great option for the environment. He also wasn’t enamored with laundry facilities.

In this video, he shows how he does half a load of laundry. The washer uses 110 power from the inverter on his RV and solar from RV to wash his clothes. There’s a good-sized tub with an agitator in the bottom and then there is also a separate compartment for the spin cycle.

“It’s very effective and very efficient,” he said. Check it out in one of Eric’s top watched videos.

In 2015, it cost Eric $31 to travel to Alcatraz Island off the coast of San Francisco for a self-guided tour. Eric used an audio tour once on the island to show his fans around Alcatraz and the main cell block.

The audio consists of memories of the guards and some of the inmates. If you’ve ever been interested in the history and daily life of inmates on Alcatraz, this is a great video.

Don’t miss any of Nomadic Fanatic’s trips to Area 51.

It seems to be almost a yearly event to locate Aliens, UFOs, and other terrestrial sightings. Roswell has an alien on every corner and at every establishment.

In this video, he visits the UFO Museum and more. He does choose a magnet for his collection. What would you choose?

Don’t rely on RV industry new sources (owned by the manufacturers) or newbie YouTubers to keep you informed with RVing news.

Stick with Nomadic News. We publish the daily articles and breaking stories that matter to your RV lifestyle.

Who Is Getaway Couple? 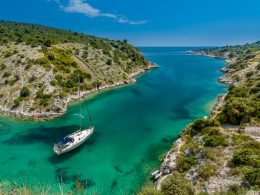 Have you ever dreamt of sailing and diving around the world? Expedition Drenched takes you on a magical…
4 shares
4
0
0 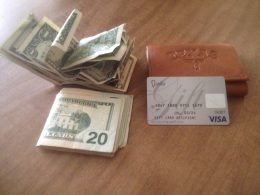 Marc and Tricia Leach have created not just a YouTube channel but an RVing community. So many of… 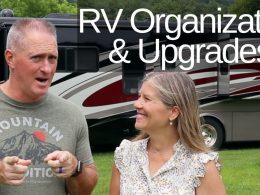 You, Me, and the RV blasted onto the YouTube scene just a few years ago, but they have… 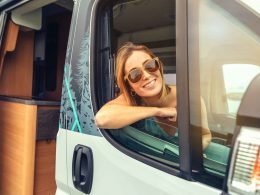