You might expect a professional bass fisher to have a fancy bass boat. However, did you know every year, more and more professional anglers are opting to skip hotel rooms and choosing RV living instead? Let’s look at a handful of the best RVs used by pro bass fishermen.

Why Do Pro Bass Fishermen Use RVs?

If you look at the Bassmaster schedule, it’s easy to see how much traveling the professional fishing circuit requires. Many anglers are embracing the RV lifestyle to live comfortably and prepare for tournaments. Traveling from city to city and living out of a suitcase can be exhausting. However, when you bring your home to each tournament, you can leave your suitcase at home.

These anglers recognize the consistency that an RV can provide. Only with an RV can you sleep in the same bed night after night while on the road, have a bathroom, and fill your fridge with favorites. While it doesn’t guarantee they’ll catch more fish, it certainly helps keep them mentally ready when it’s time to hit the water.

Whether it’s a massive fifth wheel, a truck camper, or a pop-up camper, we’ve got the best RVs used by pro bass fishermen. Let’s dive in and check them out.

About the Keystone Fuzion: Brandon and his wife live in a Keystone Fuzion 4221 toy hauler with their dog, Bella. The Fuzion 4221 has three slide-outs and plenty of space for two full bathrooms, two bedrooms, and, of course, a massive garage. They’ll likely never run out of water, thanks to the huge 110-gallon freshwater tank. This toy hauler also has room to sleep seven, should family or friends join them.

Who Is Brandon Palaniuk? Brandon Palaniuk has been an elite Bassmaster since 2011. He has earned five elite wins and is a nine-time Bassmaster Classics qualifier. Palaniuk has participated in 126 total tournaments and finished in the top 10 for 27 of those tournaments. He has caught more than 4,559 pounds of fish, and his career winnings total more than $1.52 million.

About the Cirrus 920 Truck Camper: The Cirrus 920 Truck Camper has practically everything a bass fisher could ask for in an RV. This camper has a dry weight of 3,530 pounds and contains many innovative features. A queen bed rests on a Froli sleep system to help with air circulation. This truck camper even comes with a refrigerator, convection microwave, and stovetop.

Who Is David Walker? David Walker has been fishing with Bassmasters since 1990. He has fished in 163 total tournaments and finished in the top 10 in 26 of them. He has caught an impressive 4,839 pounds of fish and won more than $1 million for his efforts.

About the Arctic Fox 1150: Mark Burgess has been truck camping practically his entire life. It’s no wonder he selected the Arctic Fox 1150 for his home on wheels for tournaments. The Arctic Fox 1150 has a dry weight of 3,358 pounds and sleeps four people. With 59 gallons of fresh water capacity, there’s plenty of water for a long weekend of camping (or fishing). Special four-seasons foam block insulation helps campers stay warm. The arched ceiling offers six feet seven inches of headspace.

Who Is Mark Burgess? Mark Burgess has been fishing in the pro series since 1996. He has fished in 55 tournaments and has six top 30 finishes, two top 20 finishes, and one top 10 finish. He has caught 976 pounds of fish and won about $52,000 throughout his career.

About the Phoenix Pop-Up Pulse Camper: Mitch Kistner’s Phoenix Pop-Up Pulse SC is a custom-made pop-up camper. Mitch loves having an incredible amount of storage space under the cabover bed. His custom pop-up truck camper also has a full kitchen and bathroom. The camper allows him to be fully self-contained and independent. He travels to fishing spots in his RV but plans to eventually take his camper to a music festival in the off-season.

Who Is Mitch Kistner? Mitch Kistner has been fishing professionally since 2011. He has fished in 14 tournaments and has one top 30 finish. He has caught 133 pounds of fish and won about $2,000.

There are so many different ways to use an RV, including for work. These pro fishermen show how an RV can even adapt to their line of work. What other careers can you imagine taking place in an RV? 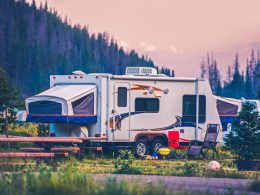 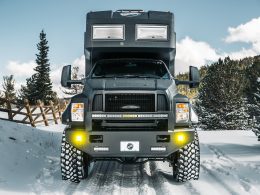 It’s fair to say that not all overland vehicles are created equal. With the right vehicle, you can… 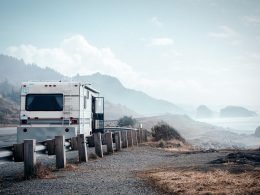 Few travel methods offer more luxury than a Class A motorhome. Have you ever camped next to one…
5 shares
5
0
0 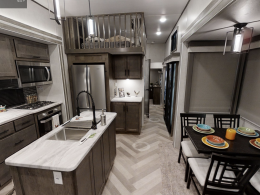 This Two Story RV Is Huge