Home Blog 5 Hybrid Campers of the Future
View on YouTube

Do you love the smells and sounds of canvas tent camping but also enjoy the conveniences of a camper? It can start to feel like you have to choose between a fancy and expensive home on wheels or roughing it in a tent.

What Is a Hybrid Camper?

A hybrid camper is a cross between a hard-sided camper and a pop-up style camper. Hybrid campers can vary in style, but by definition, all hybrid campers have a mix of canvas and hard exteriors. Most feature a hard shell on both the top, bottom, and sides, and only the pop-outs use canvas.

The Benefits of Hybrid Campers

If you can’t decide if you want a standard camper with a tough shell or a pop-up, a hybrid is a great compromise. Or maybe you don’t want to lose the feeling of sleeping in a canvas tent but want the convenience and comfort of a camper. A hybrid camper allows you to hear the nature around you still, and there’s nothing quite like rain tapping the canvas above you.

Hybrid campers are lighter than traditional campers due to the portions of canvas. This makes them easily towable with smaller trucks and vehicles. Not purchasing a more robust vehicle is a big factor for many.

The Downsides of Hybrid Campers

One of the most considerable downsides to owning a hybrid camper is temperature control. Having canvas pop-outs means that while you can cool and heat your interior, it will take a bit more to achieve your desired temperature. You may have to settle for a bit above or below your normal comfort level.

Not all parks will accept hybrid campers, and you shouldn’t use them at all in some specific areas. Some resorts restrict the types of RVs allowed on their property, and hybrids are often lumped together with tents, putting them on the restricted list.

Hybrids and pop-up campers can be discouraged in areas with significant bear populations. Bears have a great sense of smell and can easily smell your dinner or other scented items through your canvas. Unfortunately, a bear would easily tear through a canvas pop-out on a hybrid camper.

If you’ve decided a hybrid camper is in your future, you’re probably excited to start your search for the perfect unit. We’ve gathered a few of our favorite hybrid campers to help you get started. Let’s take a look!

About: There are five floorplan options for the Flagstaff Shamrock lineup. They range from 21’2” to 24’10” in length. The weight varies from 4,259 lbs and 5,639 lbs. The freshwater tanks hold 54 gallons, whereas the gray and black holding tanks each hold 30 gallons.

Features: Each Flagstaff Shamrock comes with two or three canvas pop-outs depending on the floor plan. The pop-outs feature queen beds, ensuring plenty of sleeping room. There are spacious dry bathrooms. There’s exterior storage and several cabinets within the camper for extra storage space. All models come equipped with an awning.

Features: The Rockwood Roo hybrid travel trailer has three canvas pop-outs and one standard slide. There’s a large dinette on the slide with seating for four. Each of the canvas pop-outs features a queen bed. When the dinette is converted into a bed, there’s room to sleep 10. This model comes with a 17-ft awning.

About: The KZ Escape E180RBT is a mid-sized hybrid camper at 21’9”. This model weighs 3,320 lbs. The freshwater capacity is 20 gallons, the gray holding tank can hold 32 gallons, and the waste holding tank has a total capacity of 24 gallons.

Features: The Escape E180RBT has two canvas pop-outs, each having a bed. The dinette folds down into a sleeping area, giving this camper a total sleeping capacity of six. Even though this is not an overly large camper, there’s a rather impressive pantry cabinet. There’s a 13’ awning on the exterior and an outdoor storage compartment.

Features: Two hybrid campers in the SolAire eXpandable line have two canvas pop-outs. One of the campers has three pop-outs, with all pop-outs having beds. The 185X has a unique desk setup that’s ideal for getting some work done while camping. Two of the units have sleeper sofas, increasing the sleeping space.

MSRP: (These are temporarily out of production, so no MSRP information is available.)

Features: If you truly want a perfectly mixed camper, the Jay Feather X23E is worth a look. There are canvas pop-outs as well as a traditional RV slideout. The canvas pop-outs have beds and additional sleeping space on the jackknife sofa and convertible dinette, giving this unit a sleeping capacity of up to 10.

Is a Hybrid Camper a Good Investment?

Hybrid campers are great for those who tend to camp in good weather and still want to have a little bit of a tent experience while being in a camper. They’re lightweight, making them accessible to more people, yet still offer many great comforts such as full bathrooms and kitchens. Families or couples that often camp throughout the summer will likely enjoy this camper style the most.

Have you considered a hybrid camper? If you have one, what do you feel are the biggest pros and cons of ownership? 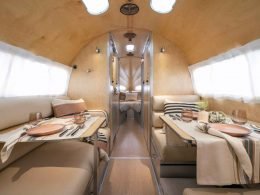 We may not have flying cars, but nearly everything regarding an engine is going electric. Electric bikes and…
1 share
1
0
0 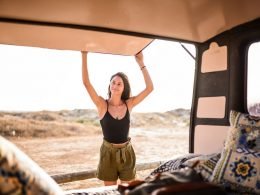 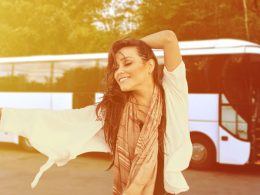 In the fall of 2021, Keep Your Daydream, a popular YouTube channel produced by full-time RVers Marc and… 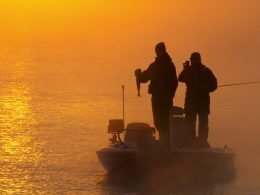