Home Blog Yamaha Versus Honda: Which Generator Is Best for Campers?
View on YouTube

A generator can transform where and how you use your camper. Having the ability to create power for yourself provides a sense of freedom. You’re no longer restricted to camping and using your RV in campgrounds. You can now camp anywhere you can legally park your RV, including some epic boondocking locations.

Two of the most talked-about brands for generators are Yamaha and Honda. So which generator is the best for your camper? Let’s look and see!

About Yamaha Generators for Campers

Yamaha has been producing generators since 1973. It has continued to grow and evolve its technologies and in 2009 released the EF2000iS. This was an incredibly lightweight and powerful inverter generator. It made it perfect for RVers to run small appliances like microwaves, televisions, and other luxuries while camping.

These generators are great because they’re extremely quiet, powerful, and fuel-efficient. Many RVers love the flexibility of joining them together to double the power. They’re a great way to power the electronics in your RV.

Depending on your needs, you can find a Yamaha generator for your camper. The company offers models from the 2,000-watt EF2000iSv2 to the massive 6,300-watt EF6300iSDE. Whether you’re looking to keep your batteries charged or run multiple air conditioners, Yamaha can get the job done.

About Honda Generators for Campers

Honda currently offers generators ranging from 1,000 watts to 4,000 watts. Its models use the “eco-throttle” feature, which adjusts the throttle based on demand. This means the engine doesn’t need to run at higher RPMs when the demand isn’t there.

This creates quieter and more fuel-efficient generators. When you’re camping, you appreciate both of these qualities in a generator.

What Is an Inverter Generator?

You can easily see the effects when using power-hungry devices like microwaves and coffee makers while camping. The generator will rev up while they’re running and then idle once they finish running. The results are a quieter generator that is more fuel-efficient.

There’s a reason why the Yamaha EF2200iS and Honda EU2200i are popular among RVers. However, how do they stack up against each other? Let’s look and see!

When you’re camping, the last thing you want is a noisy generator to keep you awake or ruin the fireside vibe. In comparing the two, the Honda EU2200i performs slightly better than the Yamaha EF2200iS. When running at 25%, the EU2200i hums along at 48 dB, while the EF2200iS performs at 57 dB.

The nearly 10 dB difference is an 18.75% increase in noise. It’s not a drastic difference, but it’s noticeable when the two are running. You can’t argue with the numbers either, as the Honda EU2200i is the quieter generator.

Both generators crank out at least 1,800 running watts. However, the Yamaha EF2200iS uses a 79cc motor compared to the 121cc Honda motor. Using a smaller engine is largely why the Yamaha is louder than the Honda.

Many RVers choose to store their generator in the back of their truck during transit. If you had to choose between two generators that produced equal power, you’re likely always going to choose the lighter model.

Let’s be clear, both of these generators are extremely reliable. Honda previously had some issues and recalled over 200,000 units, but it addressed the situation and made adjustments. So when it comes to reliability, you can’t go wrong with either generator.

The Yamaha EF2200iS does have an incredibly convenient maintenance panel that requires no tools to access it. This gives you easy access to some of the critical components for the engine and other components that you might need to service. An easy carb drain also allows you to empty your carburetor to prevent stale fuel issues during long-term storage.

The Honda EU2200i provides a few maintenance features to help you stay on top of maintenance and for it to be as easy as possible. The oil alert sensor helps alert you when the generator is running low on oil. It will shut down the engine to protect it from any damage, and a flashing light will let you know to take action.

We love a few features about each of these generators that make them unique. Some of the features we love on the Yamaha EF2200iS are the fuel gauge, a tri-handle, and the 30-amp direct electrical connection. The tri-handle is exceptionally convenient to help move the generator around your campsite and into storage at the end of your trip.

One thing we love about the Honda EU2200i is the Bluetooth connectivity. You can wirelessly monitor the output of your generator and stop it. There’s no need to go out in the dark to shut it off before bed. If you want to connect your RV to the generator directly, you’ll need to make sure to purchase the EU2200i Companion, as it includes the 30-amp connection.

The Yamaha EF2200iS is slightly cheaper at approximately $1,100 compared to the Honda EU2200i’s $1,200 price tag. Keep in mind that both of these generators are popular and can be in short supply.

If you plan to purchase one of these generators for your camper, we highly suggest you plan for it. You don’t want to cancel your camping adventure because your generator didn’t arrive in time.

If we had to select a winner, we’d crown the Honda EU2200i as the winner. The slightly heftier price is worth the lighter and quieter generator.

However, both generators are great options, and if you can’t get your hands on the Honda, the Yamaha EF2200iS likely won’t disappoint you. Either way, you’ll get to enjoy the freedom of new exciting adventures in locations that weren’t previously possible.

Where would you go camping if you had a generator to power your camper?

The VW Vanagon Is an Iconic Road Trip Van 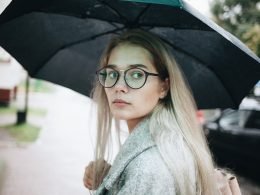 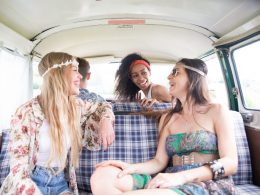 Who Are Newstate Nomads? 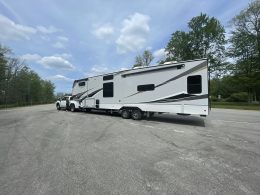 Why Do So Many People Complain About Thousand Trails 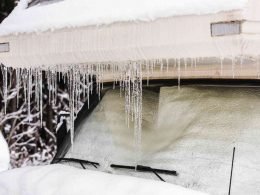 While camping season is during the summer for most RV owners, some enjoy using their rigs year-round. Using…