After two years living in a van and most of a third year living wherever his motorcycle took him, YouTuber Finding Simon decided to go all-in on a sailboat. Not only did Simon want to set sail, he also wanted to do it completely fossil fuel free.

Madness, you say? Not so, according to Simon, who has invested years of his sweat equity and several thousand dollars into creating the home of his dreams on water.

Intrigued? So were we. So let’s dive in and learn all about Finding Simon and his quest to sail the ocean in his home on waves!

Who Is Exploring Alternatives?

Exploring Alternatives is the brainchild of Mat and Danielle, a Canadian couple passionate about exploring alternate lifestyles. They travel in their self-built camper van to film their videos.

They are also the ones that led us to Finding Simon.

Who Is Finding Simon?

Finding Simon is the YouTube channel of Simon Stiles, who has been filming his nomadic adventures even before he decided to live on a cruising catamaran.

For the past few years, he has been sharing his renovations as he turns his boat into a fossil-fuel-free vessel. He posts videos about his adventures in doing the conversion, as well as his off-grid travels.

What Kind of Sailboat Does Finding Simon Own?

A catamaran is a sailboat with two hulls connected by a bridge deck between them. Finding Simon’s offshore catamaran is for open-water cruising and long voyages.

When Did Finding Simon Buy His Sailboat and for How Much?

Simon bought his boat in 2017. When he bought Old Dog, it had already sailed around the Pacific Ocean three times, but had been sitting in the same spot for 12 years when he found it.

“It hadn’t moved. It was an absolute derelict,” Simon told Exploring Alternatives.

Having bought it sight unseen from the other side of Canada, Simon paid 5,000 Canadian dollars (or about US$3,8250) for the boat, which he characterized as “way more money than it was worth.”

Why Did Finding Simon Choose to Go Fossil Fuel Free?

When Simon bought Old Dog, it had a functioning diesel engine, but he still opted to shift to an electric motor and go fossil fuel free with his boat. A large part of the reason he made the switch was to be more environmentally friendly. Solar panels and lithium batteries had come down in price enough that it made sense to him to make the conversion.

In addition to being friendlier to the environment, Simon says that going fossil fuel-free was also a matter of convenience. If he wants to do long crossings with Old Dog, he doesn’t have to be limited by the amount of fuel he can hold on board. With solar power and other alternatives, he can motor as far as he wants for as many days as he wants.

How Much Solar Power Does Finding Simon Have?

Finding Simon has sixteen 330-watt solar panels on his boat. That’s enough to generate 5,280 watts of solar power. For his day-to-day living needs, that’s quite a bit.

Simon can power pretty much whatever he wants. He runs a washing machine, induction stove, refrigerator, and a freshwater maker.

But when it comes to powering the boat, operating strictly off the power the solar panels generate is a bit lackluster. When the boat starts moving, it’s only enough energy for about seven or eight horsepower, which doesn’t move the boat very fast.

If he wants to go faster, Simon has to use electricity stored in his batteries. He has just shy of 20-kilowatt hours of battery storage. And he uses one 12-kilowatt motor.

He doesn’t have sails yet, but Simon will be adding those, which will help reduce his electricity usage. But during the summer, he can lift anchor in the morning and travel 50 kilometers before sunset without touching his batteries.

What Are the Disadvantages of Sailing With Only Solar?

One of the biggest disadvantages to solar is that it’s weather dependent. If it’s raining or cloudy, there’s not much solar power. That puts a heavy burden on the electricity stored in the batteries.

To counter that, in addition to eventually adding sails, Simon is also installing wind turbines. He may not get much solar power when it’s raining and stormy, but he can still use the wind to generate power via the turbines.

He just has to hope extremely calm, cloudy days are few and far between.

What Has Finding Simon Learned Through His DIY Project?

When Simon first purchased Old Dog, he told friends that he would be sailing within six months. That didn’t happen. It has taken a lot longer than he had planned to get the boat into the sailing shape he desires.

It has been a slow process, but Simon has learned many skills along the way. He’s mentoring under a sailmaker, learning to TIG weld, and learning to machine parts. In repairing his boat, Simon did all the woodworking and boatbuilding himself, including learning fiberglass work and engine repair.

Though he embarked on boat ownership without most of these skills, he is now confident that he can handle just about anything that comes his way in regard to Old Dog.

Where Will Finding Simon’s Catamaran Take Him Next?

Honestly, where and how far Finding Simon’s catamaran will take him next is a bit of an unknown. At the time of the interview with Exploring Alternatives, Old Dog had yet to go through tests in open waters.

“I don’t really know what the boat’s going to be capable of,” said Simon. “Everything I’m doing hasn’t really been tested out in the wild yet.”

Despite that, Simon is confident in the technologies he is employing and the work on his home on the water. He sees advantages to his vessel comparable to boats that cost half a million dollars or more.

But what if it can’t manage long open passages?

“If it ends up that this boat can only do these Southern Gulf Islands, well, there’s worse places I could be stuck. Not a big deal. I still have a four-bedroom home on the water.”

Can a Sailboater Sleep Anywhere in Open Water?

Are you ready to live vicariously through the OG sailing YouTubers? We’ll introduce you to them in this…

Who Is Learning the Lines?

Learning the Lines is not one person; it’s a whole family! If you’re into sailing, you may already… 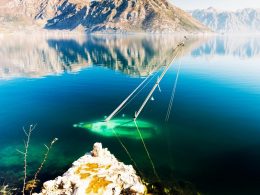 Do pictures of a boat floating on calm, open waters have you considering the possibilities of living on…
11 shares
11
0
0