Home Blog Who Is SV Delos?
View on YouTube

Does selling everything you own to sail around the world sound like a dream? Well, it’s a dream come true for SV Delos. This popular YouTube channel takes viewers along on the journey.

Keep reading to find out who SV Delos is and why they decided to live on a sailboat. Then, we’ll look at their vessel and some of their most-watched videos.

Brian and Karin are a couple who navigate Sailing Vessel (SV) Delos. Their YouTube channel has over 785k subscribers. They document their lives and sailing adventures with new videos every Friday.

Captain Brian purchased SV Delos in 2008. He was single and sold everything he owned to sail the world. Soon after he began his journey, his brother, Brady, joined him on the adventures.

They found love along the way, and their partners joined the crew. Brian and Karin have since married and have a young daughter. With Brian at the helm, they sometimes bring on other crew members, but most of the time, it’s their family of three onboard.

Why Did SV Delos Decide to Live Aboard a Sailboat?

Brian initially decided to live on a sailboat simply for the adventure. He describes selling everything and setting off on the grand exploration as a defining point in his life.

Brian had started a software company but felt like something was missing. Like many who live full time on boats or in RVs, travel and learning about new cultures can be a motivator and way of life.

What Type of Sailboat Does SV Delos Have?

SV Delos is a 53-foot Amel Super Maramu. It’s a monohull sailboat the manufacturer built in La Rochelle, France, in 2000. Delos is a sailing ketch, meaning it has two masts, and it can sleep up to six people.

There is a water maker on board that allows them to turn salt water into fresh water that they can filter for drinking and washing. The sailboat also has solar power. Most importantly, when they have provisioned it well with food and supplies, they can sail for months without docking.

What Are the Benefits of a Monohull Sailboat?

Which is better, a monohull sailboat or a catamaran? Sailors ask this question frequently. The answer primarily depends on personal preference, but a monohull has many benefits.

A monohull sailboat can sail better upwind due to its keel. The keel is the structural beam that runs down the boat’s center from the bow to the stern.

Essentially, it slices through the water more effortlessly than a catamaran. As a result, a monohull is also easier to tack and turn faster.

SV Delos has hours of footage on their YouTube channel to leave you inspired. Let’s take a look at three of their most-watched videos.

There is a long-standing tradition that when sailors cross the equator for the first time, they perform a ceremony onboard. In this YouTube video, Brian and Brady walk through the ceremony with their female crewmates, who are having their initial crossing. In this episode, SV Delos crosses the equator from the southern to the northern hemisphere.

Sailing Hardcore – Gettin’ on That Lean

In this video, SV Delos leaves the Andaman Islands in Asia to start their 1,700 nautical miles sailing to Australia. The trip will put them out at sea for about three weeks, and they will document the experience.

Then, as they try to navigate the monsoon season in the Indian Ocean, they dodge squalls in Indonesia and hit some rough seas.

The crew of SV Delos explores the Raja Ampat Islands in Indonesia in this episode. They get lost while wandering around, only to find a great spot to relax.

Also, the crew checks out a cave on land full of bats. Brady gets food poisoning, and the team has to put their medical training to practice.

Where Is SV Delos Now?

You may notice that SV Delos’ YouTube videos are not in real-time. However, you can keep tabs on where they are in the world. They have a tracker in real-time via their website through the Predict Wind software.

This way, you can check in to see where they are at any time. It also gives you intel into what kind of weather they’re facing.

HOT TIP
Here’s the truth about living on a boat versus living full-time in an RV.

Where Else Can You Find SV Delos?

SV Delos is living a life of freedom and adventure. They provide inspiration and education for those who want to try as sailors. We hope you get a chance to watch some of their vlogs. Please subscribe to their channel if you like what you see.

Would you ever consider sailing around the world?

This Is Why Everyone Is Still Talking About Tacozilla 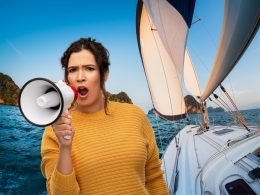 When social media influencers get the short end of the stick from a company, they’ll often warn their… 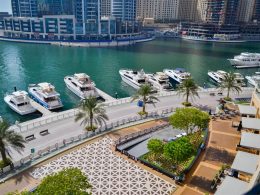 Are Marinas More Expensive Than Campgrounds?

While boats spend most of their time in the water and RVs spend their time on land, they… 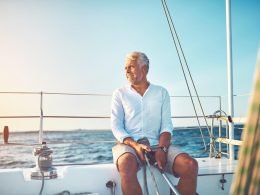 We’re all a little older today than we were yesterday. You may not feel it from one day… 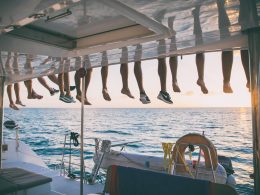