Nearly half a million videos and images have been uploaded to Instagram using #fulltimerv. It’s easy to find happy families and individuals posing in front of some incredible landscapes and iconic settings. Some even document their travels on YouTube in what seems like National Geographic or Travel Channel-worthy videos. The landscapes and adventures, whiling seeming out of this world, are real places and events.

Full Time RVing provides opportunities for adventures and making memories. You’ll see and experience things some people will only dream about. That’s what people like to watch, it is why they hit the like and subscribe buttons. They might say they want the “real stuff” but often that’s only if the “real stuff” is the good days.

It is easy to get caught up in the glamorous journey that we fail to remember or realize, that it is only part of the story. We may not see the 3 AM busted pipe, the arguments that happen when tensions get high, the whining that happens on both the adults and children’s sides. Those things happen too, and if you aren’t prepared for it, you may feel a bit blindsided. Things break, GPS fails, and plans fall through. Life still happens.

Not everyone who calls it quits does so because it didn’t live up to their expectations. People decide to call it quits on full time life for a variety of reasons, let’s look at why these full timers decided to stop living the full time RV life.

Who They Are: Kyle, Olivia, and most recently Nora make up the Drivin’ and Vibin’ crew. Kyle and Oliva met at a restaurant in Alabama where they both worked. Eventually, they moved into an adorable cabin together and considered buying a house until a friend of theirs went on a month-long trip. This inspired them to hit the road full time.

They spent a year preparing and officially hit the road in September 2015. The couple started their adventures off in a Fiberstream and then renovated an Airstream. They’ve created the Drivin’ and Vibin’ community by sharing their experiences and knowledge on their social media, including their YouTube channel and blog.

Why They Quit Full Time RVing: When Kyle and Oliva started traveling in 2015, the full time RV living scene was different. With the incredible growth of new RVers, it became difficult to snag last-minute spots. Drivin’ and Vibin’s preferred travel style is to be more relaxed in their adventures vs. having a rigid schedule.

Additionally, even when they could get a spot, the parks felt more crowded than they preferred. With it being harder to get booked in RV parks even public land was getting more use than normal.

This wasn’t the only thing that pulled them off the road though.

After having their daughter, Nora, the couple began to feel that it just wasn’t enough space for their growing family. Not only did they feel Nora didn’t have quite the space they wanted her to have in their 28-foot airstream, but it also made managing a growing business difficult.

Finally, Kyle felt it best that he works from a separate office – something that is difficult, and sometimes impossible in such a restricting space.

Who They Are: Tracy and Cruz began their RV journey after watching others enjoying the lifestyle on YouTube. Cruz assumed that because she had spent many years traveling around the globe, she’d also enjoy this lifestyle.

They sold all of their belongings and began their full time RV life in October 2019. Tracy and Cruz began their journey in a Sprinter Van before moving into a 5th wheel in March 2020 after they realized the van was just too cramped for them. They chose a Grand Design Momentum Toy Hauler.

Why They Quit Full Time RVing: Tracy was the main driver of their new big truck and 5th wheel. Ultimately it felt like a weight on Tracy’s shoulders and driving wasn’t ideal for Cruz either. They felt that the big 5h wheel was too overwhelming to haul around, but the small space of the van just didn’t work either.

In an already stressful situation and then coupled with all that 2020 had to offer, their relationship was suffering as a result of the challenges. The strain of the lifestyle was just too much for them to continue the lifestyle.

3 Why We Stopped Full Time Travel in an RV

Who They Are: Suburbian Pilgrims is a family of 5 that lived in an RV for 4 years. Prior to beginning their full time rv journey, they sold their San Diego home. One of the benefits of RVing for their family was that total monthly RVing expenses were less than their mortgage on their California home.

The family of five made tons of memories and friendships while on the road, but are currently living back in a sticks and bricks home. They have been off the road for the last two years.

Why They Quit Full Time RVing: After traveling full time in their RV for 4 years, their children wanted explore a more traditional life. They wanted to see if what they were possibly missing out on by living the nomadic lifestyle.

They had traveled for so long and from so young that they were starting to forget what it was like to live in a house. In the video explaining why they quit the full time RV lifestyle, Jason mentions that they miss the lifestyle and are looking to get back on the road.

Who They Are: Tom is the mind and on-screen presence of HoboTech. He describes himself as “the bearded swashbuckling videographer who shakes the camera and talks way too much”.

His recent videos consist mostly of reviews of technical and electrical RV products such as generators. Until the summer of 2020, Tom traveled in his 1995 Roadtrek 190 Popular. Tom purchased his Roadtrek named “MIR” in 2006 from Craigslist. MIR has served as the means of travel for Tom and his cat Odin around for over 23,000 so far.

Why They Quit Full Time RVing: The idea of buying a home and homesteading is something that Tom had wanted to do for quite a while. When the pandemic began many campgrounds completely shut down and that prompted him to shift his thinking towards homesteading sooner vs later.

In the summer of 2020, Tom decided the time was right to put his homesteading plan in action. He purchased property in Arizona which he feels is close enough to shops to feel comfortable but far enough from civilization to be away from it all. Tom is not permanently getting off the road though, he still has his trusty Roadtrek, it just will no longer be used for full time travel.

Who They Are: The Gray family consists of Nick, Rachel, Lana, Mariah + Bella (their dog). While Nick was born in the Pacific Northwest, he grew up in Rome where he became a seasoned traveler. He left his corporate job in pursuit of a dream of full time travel with his family.

The Gray’s had their first experience with tiny living in Italy. After their experience in Italy, they hit the road full time in a 30-foot travel trailer that they renovated. They spent their 16 months on the road enjoying National Parks and other unique places as they road schooled their 2 children.

Why They Quit Full Time RVing: The Gray family never intended to full time RV forever. Their intentions were to spend at least a year traveling the country and checking out areas they might want to live. Ultimately the timing of their coming off the road was due to common reasons amongst RVers.

They wanted a more stable and consistent community for themselves and their children. They missed the routine that being settled down in one location. Eventually, the lifestyle presented some stressors including decision fatigue and always being in a state of planning.

Lastly, space became a bit more of a challenge than they had planned. While they do love the minimal lifestyle, the RV just became too small due to the space needs for Nick’s work as well as the standard items that make family life comfortable. They weren’t in a rush to finish their journey as full time RVers, they just knew it was time. They look forward to more travels in the future.

Why Are So Many RVers Calling It Quits?

Ultimately, while there are some common themes amongst reasons why people call it quits on full time RV life, it is also very individualistic. Some never intended it to be a forever journey, so calling it “quits” was a natural progression. For others the lifestyle tired out, it no longer had the feeling of freedom and instead began to make them feel trapped.

Recently, with the events of 2020, there has been a common theme among RVers who are calling it quits. While the uptick of others choosing the lifestyle is great, it has also caused a bit of resource strain that simply wasn’t there before. It is now more difficult to travel without planning far in advance.

For many, the freedom to come and go as they wanted was the essence of why they were traveling. The freedom to wander around without specific plans just wasn’t as easy anymore. Add into that, the issue of campgrounds and even Bureau of Land Management land closing and it just became something that it wasn’t before. It feels like a natural point to either step aside for a period of time or even settle down permanently.

Who Else Is a Quitter?

Sometimes things simply run their course, even those things that once brought us so much freedom. Some go into full time RV life with an exit plan in place, others were more opened ended about it. Coming off the road doesn’t mean their desire for travel is gone, simply that it is no longer their main focus. If you are a full time traveler, do you have an exit plan in place or is it more open-ended? 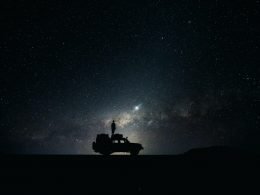 You’re Not Special: Soon Every Nomad Will Have Starlink

Staying connected while on the road is more important now than ever. This has been frustrating for many… 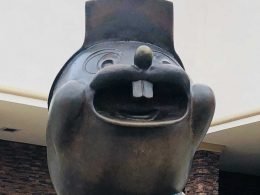 Why Do People Love Buc-ee’s?

When it comes to gas stations, there’s nothing quite like Buc-ee’s. With a cult-like following, devoted followers will…
6 shares
6
0
0 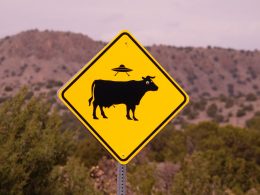 Sedona AZ Is for Weirdos

Singer and songwriter Micheal Franti sings, “All the freaky people make up the beauty in the world.” And… 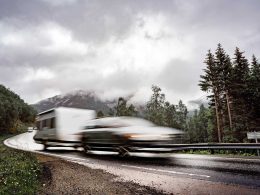 Can a Van Tow a Camper?

Vans are popular vehicles for families because they can carry a tremendous amount of cargo. You’ll see kids…
1 share
1
0
0