Home Blog “Naked Cannibal Campers”: What This Campy Independent Film Can Teach You About Camp Safety
View on YouTube

“Naked Cannibal Campers”: What This Campy Independent Film Can Teach You About Camp Safety

When you don’t take safety seriously, bad things can happen. If you’re camping, it should always be at the top of your mind, and you should do everything possible to keep yourself and your loved ones safe.

It’s far easier to learn from the mistakes of others than to make the mistakes yourself. Luckily, “Naked Cannibal Campers,” an independent film we found, is a great example of why you should value safety during your adventures. Let’s dive in!

What Is “Naked Cannibal Campers” About?

“Naked Cannibal Campers” was written and directed by Sean Donohue and released in December 2020. Three close guy friends load up their fishing gear and beer for a weekend fishing trip to the lake. However, they encounter three rather sexy-looking women as they make their way to their weekend adventure.

The trio gets invited by their new lady friends for dinner. And like any good horror movie, the men take the bait for the women’s deceit. They then find themselves in a rather compromising and dangerous situation.

Who Are the Stars of “Naked Cannibal Campers?”

For several of these actors, the film introduced them to the big screen. However, a few have previous experience working on independent horror films.

What Are the Production Companies Behind It?

The two production companies behind this film were the Tampa-based Gatorblade Films and Reaper Films. However, the film used Indiegogo, a popular crowd-funding site for creators, to finance portions of the film.

The film’s goal was to raise $2,000 through crowd-funding, but they had 108 backers that donated a total of $4,905. Donors also had the opportunity to purchase memorabilia from the film, like signed Blu-rays, fake severed body parts, and voodoo dolls.

What Can “Naked Cannibal Campers” Teach You About Camp Safety?

Even if you’ve been camping for years, “Naked Cannibal Campers” can remind us all a thing or two about camping safety. Let’s look at a few things you should remember to keep you safe.

Tell Someone Where You’re Going

One of the most basic safety measures you can take is always to tell someone where you’re going and when you’ll be back. This is especially true if you’re camping in a remote area that doesn’t have a reliable cell phone signal.

They’ll know where to start looking if they don’t hear from you. This is true whether camping, hiking, or enjoying some other adventure.

Familiarize Yourself With Your Destination

You must familiarize yourself with your destination to keep you and your loved ones safe. Know where the local emergency services are, how to contact them, and the specifics of your destination.

If you’ll have cell service, it’s a good idea to store the information in your cell phone, so you can quickly and easily contact emergency services if something happens to go wrong.

You want to check the weather for where you plan to be. This can help you know what clothes and gear you should pack to stay comfortable and safe during your trip. If your adventures take you to higher elevations, it’s important to remember that temperatures and weather vary considerably.

Be Aware of Risks around Your Area

You want to know what you’re getting yourself into before you get to your destination. Research the dangerous plants, animals, or conditions you should prepare for in the wilderness.

Being aware of the risks can help you know how to handle a dangerous situation, especially with animals. How you respond during a dangerous encounter can calm or exacerbate a situation.

Follow the Instructions of the Campsite or Park Rangers

Rules and regulations for campsites are there for a reason. You should always follow the instructions for the campsite or those provided by park rangers. They’re knowledgeable in an area, and if they’re telling you to do or not do something, it’s likely to keep you safe.

Don’t think you’re an exception to the rule and that the rules don’t apply to you. If you do, you could find yourself in danger or face legal consequences.

Driving can still be dangerous no matter how long you’ve been doing it. It’s easy to overestimate your skills and underestimate the conditions. Things can go from bad to worse in the blink of an eye. This means you must drive as safely as possible and only drive in approved areas.

HOT TIP
Watch these amazing 10 Best RV Movies to get inspired for your camping adventure.

What Were the Reviews?

The film didn’t receive fantastic reviews from viewers. On the popular movie website IMDB, users gave the movie a 3.9/10.

One user, kumarsiddharthsdh, left a review and said, “I have wasted my precious time for this movie, but please you don’t have to do this.” Considering that 28% of the reviewers left the movie a 1-star rating, the film likely deserves that scathing review.

Will There Be a Sequel?

Donohue hoped to make a sequel. However, the film needed to raise a total of $10,000 to help cover additional expenses for the cast, crew, and production. They hoped to add a few new elements they couldn’t afford to include in the original film.

The team set up another campaign on Indiegogo.com. However, it failed to reach its donation goal by the target date.

As a result, the film will not be produced at this time. Whether the timing wasn’t right or the interest wasn’t there remains to be seen. However, Donohue and the rest of the team could give it another shot someday.

Where Can You Watch “Naked Cannibal Campers?”

Whether you’re interested in horror movies or need a reminder of why you should value your safety while camping, you should give “Naked Cannibal Campers” a watch. You can watch the film on Plex.TV or by purchasing a Blu-ray copy on Amazon.

Wherever you choose to watch the video, clear your schedule, grab some popcorn, and turn the lights off. See if you and the three men can survive this independent film.

The Best Places to See Waterfalls in Oregon 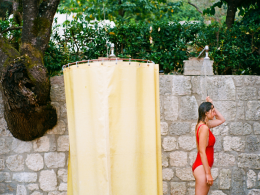 You want to grab a hot shower in your RV after a day out adventuring. But instead of… 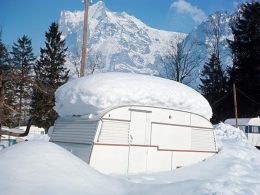 How to Properly Store Your Camper

If you love camping but you don’t camp all year long, there comes a time when you have… 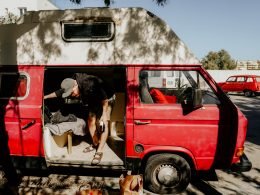 Would You Camp at a Hospital?

A hospital might be the first place you consider heading to when you’re sick or injured. However, after…
1 share
0
0
1 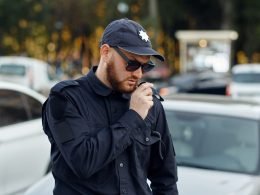 Do You Have to Open Your RV Door for the Police When Overnight Parking?

A knock on the door is one of the biggest fears of any RVer when overnight parking. Even…
10 shares
8
0
2