It’s human nature to protect yourself and those you love during uncertain times. When chaos erupts, you want to be as prepared as possible.

RVers often stock up on food and supplies for their adventures. Some live off the grid entirely. But does that make RVers preppers? Let’s see!

What is a Prepper?

Preppers take steps to prepare for a potentially catastrophic event. If 2020 taught us anything, it was the need to prepare for uncertainty. But the term prepper existed long before we started talking about quarantining and travel restrictions.

Preppers existed even in ancient times. Many took preparations during the Cold War, as well. By 2011, the term became so popular that National Geographic Channel launched the show “Doomsday Preppers.” This show, and a few others, documented some of the more intense preparations employed by survivalists.

Preppers don’t just worry about catastrophic events like storms and wars. They also consider the aftermath of such events.

Preppers will often create a survival plan that can last them weeks or even months. This will include readying their homes — or even underground bunkers — with supplies.

It’s common among preppers to create supply bags for several different occasions. These bags can remain in an easy-to-reach location like a car trunk. Preppers prepare for the chance that they’ll have to flee their home or may not be home when the event occurs.

Preppers don’t just invest in material things, but knowledge as well. Understanding survival and first-aid techniques can help them persevere.

The most typical supplies include water, food, sanitary items, emergency items, and first aid. These provide an excellent foundation when preparing for future uncertainties.

Preppers generally plan for one gallon of water per person per day. Depending on the size of the group, this could mean a significant amount of water.

Therefore, preppers also usually have a filtration system or a plan for filtering water. This allows them to store less water.

Additionally, preppers tend to stock up on non-perishable food items. Many homes could survive a week or more with what they already have in their pantries. Preppers store designated food items that require little prep and have a long shelf life. If some event restricted access to food, they’d still have enough.

Sanitary items and emergency items deserve consideration as well. In 2020, we learned just how quickly toilet paper could disappear. Preppers also stock up on emergency items and know how to use them. This allows them to treat injuries and address medical issues themselves.

Some preppers will also take advantage of opportunities to test their preparedness. This could mean practicing their survival skills in the wilderness or testing their response plan periodically. The more preppers practice, the more prepared they’ll be when they need to use their supplies, skills, and survival instincts.

While many RVers can live off-grid for an extended period, they aren’t necessarily preppers. RVers can move their whole house quickly in the event of a disaster but may still be unprepared for survival.

For example, RVs often contain minimal storage space, which limits the supplies they can carry. Plus, road closures and travel restrictions can block RVs from driving away from disaster.

Preppers plan for what they see as a likely catastrophic event. In contrast, RVers probably didn’t start RVing to prep for a disaster. RVs can’t provide safety in adverse conditions and aren’t ideal for sheltering in place.

When you’re boondocking, you’re camping off-grid, often away from designated campgrounds. Government agencies oversee public-use lands where someone might boondock. However, there’s a good chance you won’t find water fixtures, bathrooms, or fire rings while boondocking. RVers, therefore, need to arrive with everything they need, including water.

RVers who boondock often just want to enjoy the remote location and aren’t preparing for disaster. Many RVers seek an incredible destination or view and set up shop there to soak up the sights.

Overlanding differs from boondocking. It’s more about the journey and less about the destination. Overlanding can involve a weekend trip over 100 miles of rough terrain. It can also entail an extended journey that lasts weeks or months and covers thousands of miles.

For many overlanders, the journey is the adventure. They want to see and experience the world. Overlanders will usually avoid the main highways and instead explore lesser-traveled routes that few ever see.

Boondocking RVers are Better Equipped for Emergency Than Many People

Some boondocking RVers can live off-grid for extremely long periods, if not indefinitely. These RVers utilize solar panels to fill large battery banks that run their entire RV. Solar panels can power generators without a power grid or gasoline.

RVers can be mobile if an emergency occurs. It’s easier to pack up and go when you tow a majority of what you own. RVers can also travel hundreds of miles on a single tank of fuel, which can make all the difference during a catastrophic event.

Boondocking RVers don’t have to depend on others as much, which makes them better placed to weather an emergency. They’re also often comfortable staying in remote areas, which can be intimidating to others.

How Boondockers and Overlanders are Similar to Preppers

All three groups also always know what they need in terms of supplies. Boondocking and overlanding test how long you can survive on the resources you have available.

Some RVers ARE Preppers

Not all RVers are preppers, but some are. Some blend RVing and prepping so they’re ready for anything. Many in the prepper community would value having an RV prepared for a disaster. Still, only a tiny fraction of the RV community crosses over into prepping.

RVers and preppers both plan for the unexpected. Circumstances can change at the drop of the hat. Do you think an RV that’s “prepped” would be a good resource in a catastrophic event?

Let’s Take a Closer Look at the ‘Breaking Bad’ RV 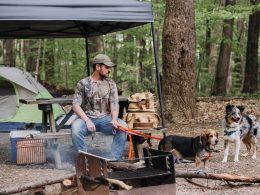 A generator can transform where and how you use your camper. Having the ability to create power for…
26 shares
26
0
0 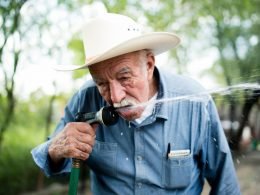 What Is a Safe Drinking Water Hose?

While there are many convenient gadgets for camping, there are only a few essentials. You must buy a…
2 shares
1
0
1 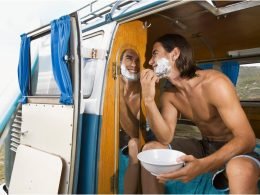 How to Easily Become an RV Nomad 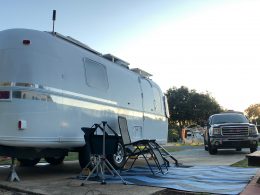 This Is Airsteam’s Red-Headed Stepchild Have you heard of Airstream’s budget RV, the Argosy travel trailer? If you…