Research from the Cleveland Clinic reveals that nearly one in 10 Americans have Ophidiophobia, the fear of snakes. However, even those who don’t fear the slithering creatures usually have a healthy dose of caution regarding rattlesnakes.

Whether camping, hiking, or just enjoying the great outdoors, you likely want to avoid an unwanted rendezvous with a rattlesnake.

Today, we’re sharing five tips to help reduce the chances of running into a rattlesnake. Let’s get started!

Where Do Rattlesnakes Live?

Despite what you might have heard, rattlesnakes don’t only exist in the southwest United States. Rattlesnakes live in almost every state except Alaska, Rhode Island, Hawaii, Delaware, and Maine. However, there are many more in the southwestern states of Arizona, New Mexico, and Texas.

Rattlesnakes cannot dig. As a result, they look for natural holes or spaces in rocks and vegetation for shelter. This is why many rattlesnake bites occur when people put their hands or feet in places without looking.

How Can You Identify a Rattlesnake?

The primary way that people identify rattlesnakes is by the distinct sound of their tails. However, not all rattlesnakes will use their tails to warn potential predators of their presence. If you spot a snake, you must look for standard features people commonly find on rattlesnakes.

In general, rattlesnakes have triangle-shaped heads much wider than their neck. Their thick bodies are often a dull color. However, their colors and markings vary by the type of rattlesnake and where they live. You must familiarize yourself with the patterns and colors unique to your area.

What Should You Do During a Rattlesnake Encounter?

Like many wild animal encounters, you should always remain as calm and still as possible. Making sudden movements could agitate the rattlesnake and escalate the situation. It should be your goal for you and the snake to exit the encounter without harm.

Do not throw sticks or rocks at the rattlesnake. Back away slowly and give the snake room to continue on its way. Rattlesnakes rarely attack unless they feel threatened. If you remain calm and still, you’re less likely to appear as a threat, and it will move on.

It’s best to report the encounter to rangers, staff, and others in the area. If you’re hiking, give other hikers a heads-up to be on the lookout. The last thing they or the snake wants is to be off guard. Rangers and staff may post signs or warnings if an area has increased rattlesnake sightings.

HOT TIP
How to Survive a Bear Attack (Probably)

If you’re like most people, you want to avoid any encounter in the wild with a rattlesnake. Luckily, there are a handful of things you can do that will reduce the chances of an unwanted rendezvous. Let’s dive in!

Rattlesnakes are most active at dusk and dawn between April and October. They’re typically hunting for mice and other creatures. However, you may see them lying on rocks or warm surfaces on cooler days when there is lots of sunlight.

Hikers and campers are fantastic at warning others about dangerous wildlife. Whether it’s bears or snakes, apps like All Trails or Campendium can be extremely helpful in avoiding encountering these pesky reptiles.

If you see an increased frequency of dangerous snake encounters for a particular trail or camping area, it may be best to consider alternative options.

Stay on the Trail

Snakes don’t want you to see them anymore than you do. As a result, they’ll typically hide in areas with thick vegetation to avoid detection. A flat, open trail will provide minimal shelter or protection, so they’ll typically do their best to keep away from them and minimize their time being vulnerable.

Staying on the trail not only helps you avoid rattlesnakes but also to follow leave-no-trace practices. By venturing off the path, you could destroy the natural landscapes and areas that rattlesnakes and other creatures call home, resulting in them having to find a new habitat. They may have no choice but to settle closer to a trail or an area humans frequent.

Snakes, including rattlesnakes, can feel vibrations in the ground. By walking heavy-footed, you’re alerting them of your presence.

If they can feel significant vibrations, they will likely start heading out of a situation or area long before you and your heavy feet arrive. This can help reduce the chances of surprising or catching a snake off guard, which could result in them behaving unpredictably.

It would be best if you always kept your distance from snakes, especially rattlesnakes. If you hear their rattle, stop immediately. The snake is warning you of their presence and that you’re too close. You should pause and use your ears to help locate where the snake is hiding.

Back away from the area slowly and avoid any quick movements that the snake may interpret as a threat. Rattlesnakes can be very fast and strike half the distance of their overall length.

If you must snap a picture or video of the encounter, use the zoom feature on your camera instead of trying to get as close as possible.

What If You Get Bitten by a Rattlesnake?

If a rattlesnake bites you or someone with you, you should call 911 immediately and seek medical attention. Luckily, medical advancements have drastically improved. As a result, while thousands of people experience rattlesnake bites yearly, only a handful of bites result in death.

Remain as calm as possible and avoid running. If you can stay calm, you typically have several hours before serious complications arise.

However, getting stressed or using too much energy can increase heart rate and blood flow. This will only send the toxins in the bite through your body faster and drastically reduce your time to get help.

Do not attempt to suck the venom out of the wound or ice it. You should remove any jewelry and wash the spot with warm water and soap. Watch for any signs of swelling or complications from the bite.

While rattlesnakes can be intimidating, you should not let them stop you from experiencing the great outdoors. Taking some of the precautions we’ve shared with you today can drastically reduce the chances of an unwanted rendezvous with a rattlesnake.

However, even if you deploy all the tips, you should still be on the lookout in areas with frequent rattlesnake encounters. But now you’re better prepared to handle yourself and the situation should an encounter occur.

Have you ever seen a rattlesnake in the wild?

Your Off-Leash Dogs Are Ruining Boondocking 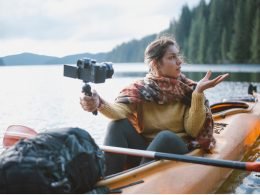 Life as a member or aspiring member of the travel media can be a bit lonely. After all,… 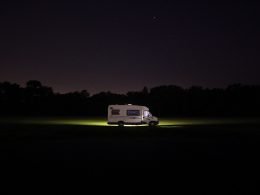 It’s not the Ritz, but a parking lot can sometimes seem just as comfortable after a long day…
13 shares
10
0
3 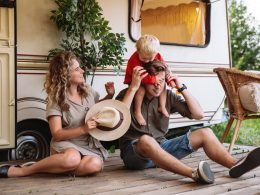 10 Best RV YouTubers To Learn From 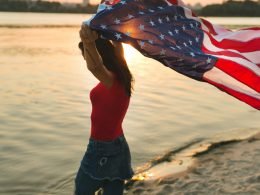 For Better or Worse, These Are the Flags RVers Fly

If you’ve RVed at all in the U.S., you’ve probably seen many different kinds of rigs and a…