Home Blog Who Is Andrew Steele?
View on YouTube

Who Is Andrew Steele?

Luxury motorcoaches can be mysterious to the common RVer. Some may think these elegant rigs are out of their league.

Andrew Steele has turned that thinking on its head, posting hundreds of video tours of some of the most expensive motorhomes. His YouTube channel has three years of interviews and tours, making many Prevost, Newell, and Monaco coaches accessible to the most curious.

He’s shined a light on the detailed planning, high-quality materials, and meticulous construction that creates each classic vehicle. His efforts have evolved into helping owners and buyers of used coaches find each other through his in-depth videos.

Let’s learn more about Andrew Steele and his enthusiasm for these majestic RVs.

Who Is Andrew Steele?

If you haven’t heard of Andrew Steele and are involved with the RV industry, he’s about to knock your socks off. This enterprising 39-year-old began his career as an auto detailer who discovered RVing while working on rigs. He lived in a 32-foot Airstream trailer and fell in love with the lifestyle.

Since 2019, Andrew has interviewed luxury motorcoach owners about their Prevost, Newmar, Monaco, and Country Coach rigs. This has morphed into a business where Andrew markets used coaches with beautifully shot videos on his YouTube channel, “RVing With Andrew Steele.”

What Is Andrew Steele Known for?

Andrew Steele has produced hundreds of YouTube videos. They highlight used luxury motorhomes, along with factory tours and RV services for motorhome owners. His videos consist of in-depth footage regarding every aspect of each coach, and it is evident that Steele is highly knowledgeable.

The production quality is high, utilizing drone footage of RV exteriors in photogenic locations and a close-up film of the amenities and features. The end product is like a professional commercial for a used motorcoach with a guide to lead you through the vehicle.

It sure beats dealing with a typical used car or RV salesman!

HOT TIP
You need to know the 5 things an RV salesmen will NEVER tell you.

When Did Andrew Start Traveling?

In 2011, Andrew expanded his detailing business to include RVs. In talking with some of his RV clients, he heard about a campground in Spearfish, South Dakota.

When things began to heat up in his home state of Arizona that year, Steele traveled to South Dakota to wait out the heatwave. He continued his detailing business in the campground while renting a basement apartment.

Before he knew it, the apartment had flooded, and he was homeless. Steele purchased an Airstream trailer to live in, quickly discovering that he could travel wherever he wished and continue working on the road.

That was the epiphany that gave him the travel bug, and he’s been traveling ever since.

You’ll get a sense of Andrew Steele’s expertise in the RV market and see just how knowledgeable he is regarding promoting the products in his videos. His pleasant personality and skill as a photographer shine through.

Take a look at his top four most popular YouTube videos to see if you would purchase any of the luxurious motorcoaches.

Andrew’s admiration for this Featherlite Prevost is contagious. You’ll see the company’s attention to detail in creating this coach. From ostrich skin and leather-covered furniture to copper-pounded sinks, the small items reflect the quality of an almost one-of-a-kind motorhome.

Steele covers every inch of this home on wheels, including trap doors that lead to secret basement bunkhouses and hidden laundry facilities. All the while, he gushes over every extravagance fit into the 45-foot motorcoach.

By the end of his pitch, you are sure that Andrew Steele will be purchasing this vehicle himself. Then you watch the following video and see that he feels the same way about another RV. He genuinely loves these rigs, and it comes across in his enthusiasm and respect.

The Nicest Motorcoach on the Market Right Now (Newell Coach 1704)

The Newell coach in this video has meticulous finishes. He covers every detail, from stainless steel diesel tanks to lighted under-mounted bathroom sinks. The rig’s paint job is representative of Newell’s superior exterior finishes. The interior has seamless slideout flooring, high gloss hardwood cabinetry, and quality fixtures in the two full bathrooms.

Andrew points out textures in leather and on surfaces like the carbon fiber patterns on the dash and the patterns on the kitchen cabinetry. The motorcoach has a modern interior design element with minimalist flair.

This bunk floorplan highlights the lengths Newell will go to provide the ultimate motorhome. They make custom bedding for each bed, so there are no problems finding sheet sets and blankets to fit.

Steele’s test drive in the coach solidified his opinion that Newell makes the best drivable motorhomes on the market, with easy maneuverability and plenty of horsepower.

Underlit quartz countertops, leather button tuft sofas, and electronics run by Alexa are a few details in this fantastic coach. The new owners will love the built-in makeup table with a stool that doubles as a dog crate.

They’ll also like the heated towel bars. A large projector, in addition to three flat-screen televisions, will provide entertainment. The high gloss cabinetry adds a European feel to the interior design.

Andrew Steele does an excellent job of showcasing the space but underscoring that it is a cozy and liveable floorplan. The exterior basement bays have a traditional design, with shiny stainless steel and carbon fiber finishes. Newell coats the coach with a stunning one-of-a-kind paint job.

We Had a Really Bad Day (RV Fire)

After three years of touring luxurious motorcoaches, Andrew Steele finally purchased his dream ride, a Newell coach. This video shows the aftermath of a fire in the RV as he and his girlfriend moved their belongings to Florida.

The short time it took to engulf the rig in flames left them fleeing with the clothes on their backs. Although they and their pets got out safely, they lost everything.

Andrew made the video to give his YouTube followers an update on the situation. He used it as a cautionary tale for others to carry several fire extinguishers, fire alarms, and carbon monoxide monitors when they travel.

He was thankful for Newell’s assistance and the support they received from other RVers and followers.

Where Else Can You Find Andrew Steele?

What are some of your dream RVs?

5 Crazy Cool Families That Sail The World With Their Kids

Who Is Jennelle Eliana? 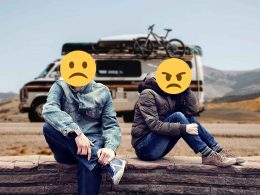 Liz and Paul of Liz Amazing look like the perfect couple on camera. They laugh together and seem…
1 share
1
0
0

Boondocking is an inexpensive and freeing way to travel the country. For many RVers, it’s their primary mode…

Instagram is an excellent place for inspiration about all things van life. But there are millions of posts…