You might be wondering whether or not you should get a composting toilet. After all, if you have a home on wheels, taking care of your waste is a reality.

Let’s talk about that.

What Is an RV Composting Toilet?

An RV composting toilet has one goal: to avoid creating sewage by composting your waste into less-hazardous organic matter.

They typically look like any other toilet and use absorbent, biodegradable material such as sawdust, coconut coir, or peat moss to help speed up the composting process. Usually, a hatch opens up into the main chamber and closes tight, so you don’t have to worry about odor.

How Do RV Compost Toilets Work?

How do these composting toilets work? Aren’t you pooping in a bucket? Not quite.

The key to an excellent composting toilet is the separation of liquids and solids. When human waste mixes with too much liquid, it creates sewage, and sewage itself is a biohazard.

Modern waste systems can be somewhat counterintuitive; by using water to flush our waste, we’re creating a biohazard that wasn’t there before. Thus, a composting toilet works by diverting urine into a separate container to allow the solid matter to compost naturally.

The answer to this question will entirely depend on who you ask. However, good composting toilets are as sanitary as possible.

Therefore, if you use a composting toilet properly, it should be no more disgusting than having to empty your black tank, if not less.

Do Composting Toilets Smell in an RV?

If you use your composting toilet properly, it should not stink up your RV. For example, the popular Nature’s Head composting toilet has a hatch that remains closed unless you need to open it for obvious reasons.

It also has a handle on the outside to mix the peat moss. If you use them as intended, there is virtually no smell.

The portion that holds urine is an entirely separate container, and it doesn’t emit an odor until you empty it. Many people divert the urine to their gray tank so they won’t have to deal with it at all, and in this case, you shouldn’t notice any smell whatsoever.

Composting toilets can get a bad rap. Now that we’ve covered how they work, let’s debunk the most common myths about them.

Contrary to what most people think, a good composting toilet shouldn’t have an odor.

It’s easy to assume that if you eliminate your black tank, you’ll have to deal with a stinky toilet in one way or another. But luckily, this is not the case.

Your composting toilet should emit no more odor than a regular toilet.

I Can’t Use Toilet Paper

Thankfully, you can! You can put toilet paper into the solid waste portion of the toilet; make sure not to bog it down too much. Toilet paper biodegrades quickly, so this shouldn’t affect the composting process.

It’s Gross to Deal With Your Own Waste

Dealing with your waste isn’t the most pleasant experience in the world, but like it or not, it’s a requirement of RV life. Thankfully, emptying your composting toilet isn’t that bad.

Depending on the type of toilet you have, there will be a recommended process. If you have the Nature’s Head, you can empty the solid waste compartment into a trash bag (we recommend doubling up on trash bags) and throw it away just like you would cat litter or a diaper. If you’re emptying the urine jug, dump it into a nearby toilet.

The Toilets Are Difficult to Install

Composting toilets are often much more accessible to install than regular toilets because they’re a self-contained system.

You may need to install a small fan for the Nature’s Head, but that’s about it. With other kinds of composting toilets, it can be as simple as setting them down in your bathroom.

Composting toilets can be much more sanitary than black tanks. Because they separate liquids from solids, you don’t risk creating a biohazard.

You allow your waste to naturally compost into non-hazardous organic material (you can even use it as compost for your flower beds, though we don’t recommend it for your veggie garden).

Just make sure to wash your hands after emptying them!

Are RV Composting Toilets Worth it?

Composting toilets can be fantastic, especially if you’re interested in boondocking off-grid. They allow you to conserve your resources (you won’t have to flush your precious freshwater into your black tank!), and they can increase the length of time you’re able to go between dumps. If these are part of your travel goals, a composting toilet is worth it.

If you have full-hookups most of the time, it might not be worth it to make the switch. Yes, you’ll have to deal with emptying your black tank once in a while, but if you’re enjoying extended stays while hooked to a sewer, it won’t make much sense to invest in a composting toilet.

What do you think? Is a composting toilet worth it?

Do Truck Stops Have Public Showers 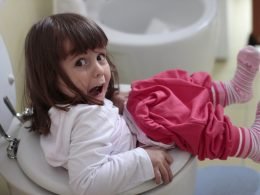 How Do Campers Use the Bathroom Off-Grid? 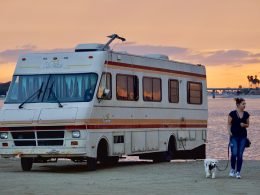 How to Be a Bad RV Pet Owner

You love your pet. It’s only natural you’d want them to join you on your RV adventure. But… 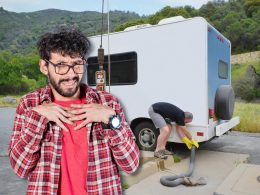 For many RVers, dumping the tanks on their RV can be a nightmare. However, it’s a necessary part… 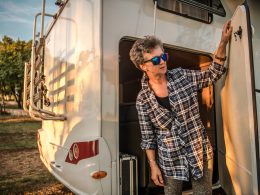