Home Blog Can You Still Book a Room at the Cecil Hotel?
View on YouTube

Can You Still Book a Room at the Cecil Hotel?

Many people think of the glitz and glamor of Hollywood when they think about Los Angeles, not a rundown 1920s hotel. Over the past 100 years, the Cecil Hotel in Los Angeles has earned quite a reputation. However, before planning a trip to LA, you’ll want to confirm whether or not you can still book a room at the Cecil Hotel.

Today, we’re taking a deep dive into the history of this legendary hotel and what the future holds for it. Let’s get started!

What Is the Cecil Hotel?

The Cecil Hotel is a 14-floor hotel with 700 guest rooms that opened in December 1924 in downtown Los Angeles. Half a decade after opening, the Great Depression hit the U.S.

The hotel recovered through the 1940s, but a couple of great decades were followed by decades of decline. The nearby neighborhood of Skid Row began attracting upwards of 10,000 homeless people and became a popular neighborhood for transients.

Under new ownership, the hotel was refurbished in 2008, and a portion of the hotel was rebranded as “Stay on Main” in 2011. Simon Baron Development acquired a 99-year ground lease on the property after Richard Born purchased the property for $30 million in 2014. Simon Baron Development closed the space in 2017, intending to renovate it and create a consistent look and feel throughout the building.

Why Is the Cecil Hotel Famous?

The Cecil Hotel is famous for a chain of rather mysterious deaths and numerous suicides that have been the subjects of many true crime documentaries.

There are documented suicides dating back to as early as Jan. 22, 1927, just a few years after the hotel opened its doors. The hotel has played a role in multiple suicides, serial killings, and killing sprees. It certainly earned its reputation for being a rather creepy hotel.

The hotel was home to many famous and gruesome deaths. It was the home of Richard Ramirez during his serial killing spree. More famously, it was also the site where Elisa Lam’s body was found in a water tank on the hotel’s roof in 2013, featured on the Netflix series “Crime Scene.”

What Happened at the Cecil Hotel?

Percy Ormond Cook was a 52-year-old guest at the hotel in January 1927. He became the hotel’s first documented suicide after he shot himself after failing to reconcile with his wife and child.

Many more guests went on to swallow poison capsules and even leap out of the building’s high windows. The hotel was also the home of serial killers and numerous murders. It wasn’t a place you wanted to stay with your family while experiencing Los Angeles.

Is the Hotel Still Open?

A large portion of Cecil Hotel went through a branding change to become “Stay on Main” in 2011. From 2014 to 2016, the hotel underwent some ownership changes and renovations.

In 2017, the hotel closed to go through serious renovation. However, the pandemic shut down the renovations, and it wasn’t until December 2021 that the hotel reopened, but with a different mission.

Baron Property Group has owned the 640 South Main Street hotel since 2015. However, while the location hasn’t changed, the mission has.

Ownership hopes to use the infamous space for a much better purpose, hopefully transforming the surrounding area into a thriving community.

Can You Still Book a Room at the Cecil Hotel?

No, you cannot book a room at the Cecil Hotel. The hotel closed in 2017 for renovations, and reopened in 2021 as an affordable housing complex. Its reopening ushered in a new era for the property that hopes to paint a brighter picture.

So if you were hoping to stay at this infamous hotel, you should make other plans. However, just because it’s not a hotel doesn’t mean people aren’t staying in the building.

What Is the Cecil Hotel Now?

In December 2021, the hotel reopened its doors after a closure that lasted several years. The structure now provides 600 apartments to low-income residents of Los Angeles.

Chief Real Estate Officer, Sierra Atilano, said, “This is the best use possible for this particular space, and really can bring a lighter side to the darkness that the building had originally.” As of July 2022, only 73 of the 600 units had occupants.

Despite thousands of homeless individuals residing in the area, filling the rooms hasn’t been easy. It took months to obtain acceptable voucher rates for the building.

Some of the building management feel the building isn’t getting the number of referrals from government agencies and local nonprofits as they hoped it would.

Is It Worth Visiting the Cecil Hotel Building?

If you’re a fan of true crime documentaries, visiting the Cecil Hotel building will likely be a fun experience. However, the surrounding neighborhood isn’t likely going to be overly family-friendly.

Massive poverty and homelessness deeply impact the surrounding area. You never know what you might see or experience when visiting the Cecil Hotel.

The amount of families and individuals choosing full time RV life has grown tremendously in recent years. What…
1 share
1
0
0 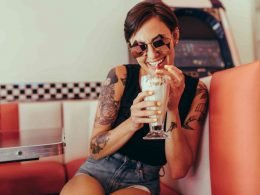 Despite their less-than-appealing name, dirty soda shops have become a standard part of the culture of Utah. This…
13 shares
13
0
0

If you’re looking for a unique RV-friendly stopover, the Kongo Klub Gentleman’s Club in Mitchell, S.D., may fit…
1 share
1
0
0