At the end of September 2022, Hurricane Ian barrelled through Florida, leaving a trail of destruction. As a Category 4 hurricane, Ian had wind speeds up to 155 miles per hour and initiated a storm surge in some southern areas of up to 18 feet.

Unfortunately, over 140 people lost their lives in Florida. The state was left in a mess, from power outages to ruined properties.

For nearly three months, San Carlos RV Park didn’t have power. Residents and visitors had to run generators to have access to their appliances and electronics. Finally, crews restored power at the end of December 2022.

Where Is San Carlos RV Park?

Cayo Costa, where the hurricane first made landfall in Florida, lies only about 24 miles northwest of Fort Myers Beach. The severely-damaged Sanibel Causeway runs just across the bay from San Carlos RV Park.

When Did Hurricane Ian Barrel Through Florida?

On Sept. 23, 2022, a tropical storm developed in the central Caribbean. By the 26th, it had strengthened to a hurricane with 105 miles per hour winds.

The National Hurricane Center explained that the storm exhibited “rapid intensification,” gaining at least 35 miles per hour in wind speeds within 24 hours or less.

By Sept. 27, Ian had intensified to a Category 3 hurricane, the strongest since Hurricane Irma in 2017. It battered Cuba before heading to the western coast of Florida. Ian made landfall as a Category 4 hurricane on Sept. 28 near Cayo Costa, Fla.

Why Has It Taken So Long for Power to Be Restored?

Unfortunately, Hurricane Ian was a dangerous and destructive storm that affected millions of residents.

According to NOAA, “In all, the storm knocked out power to more than four million customers in Florida, and an additional 1.1 million homes and businesses lost power when the storm plowed through the Carolinas…residents in Florida and the Carolinas face recovery costs estimated to be around $47 billion in insured losses.”

This wasn’t a quick fix. In fact, according to Reuters, “almost 200,000 homes and businesses still lacked power in Florida” a week after the hurricane had passed.

During that first week, the Florida Power & Light Co (FPL) explained further that thousands of homes and businesses in the most heavily hit areas of southwest Florida were “so badly damaged that they may not be able to safely receive electrical service.”

By Oct. 9, all FPL customers had power again. But that didn’t mean everyone had power. More than 44,000 Lee County customers were still left in the dark, all Lee County Electric Cooperative subscribers.

Residents on Sanibel Island had even more difficulties regaining power due to the damage to the Sanibel Causeway.

The storm severed the bridge in three places cutting off residents from the mainland. In addition, structures that severe damage needed on-site repairs on the electrical equipment.

HOT TIP
Before you go RVing in Florida, find out Is Florida Sinking?

Why Were Tags on the Poles Near San Carlos RV Park?

Stephanie Price, manager of San Carlos RV Park, explained, “There’s supposedly tags on the poles out here keeping FPL from reenergizing the feeders to give us electricity.”

After Hurricane Ian barreled through, tags were placed on poles as a safety precaution so that contractors could haul boats from the nearby mangroves. But even after all that work, the RV park remained in the dark.

Is Running a Generator More Expensive Than Using Electricity?

Grid power is much cheaper than running a generator. A gas generator will use about a gallon an hour. If a gallon of fuel costs $4, you’ll spend about $96 daily to operate a gas generator.

A diesel generator will run for a bit longer per gallon but will cost more for fuel. In some locations in the country, an electric bill can run around $100 a month. That’s a far cry from $96 per day.

How Many Campgrounds Were Damaged During Hurricane Ian?

According to the RVIA, almost 30 RV parks and resorts remained temporarily closed in Florida during the second week of October.

According to the article, Bobby Cornwell, executive director and CEO of the Florida Campground and RV Park Association, said that most parks were in Lee and Collier counties, where Hurricane Ian first made landfall.

Many cities, such as Arcadia, Fort Myers, Naples, Nokomis, Palmetto, Port Charlotte, Punta Gorda, Sanibel Island, Venice, Wauchula, and many more, all had campgrounds that were still closed almost two weeks after the hurricane came ashore.

Why Is Florida a Popular Destination for RVers?

By the end of September, many snowbirds have started venturing south for the winter. Others follow in October and November.

Florida, along with Southern California, Arizona, and Southern Texas, is a popular spot for winter RVers. You’ll find plenty of sunshine and warm temperatures to make camping through the winter more enjoyable.

Florida also has some beautiful RV parks along the coast. Thus, you get pleasant weather, beach views, and colorful sunsets, making it a top destination.

For travelers wanting attractions, the Sunshine State is full of them. There’s something for everyone, from Disney World to Universal Studios to professional sporting events.

Can RVers Head Back to Florida This Winter?

You may still find closed state parks and campgrounds, as some will have to rebuild completely. Efforts are ongoing.

So if you have plans to visit southwest Florida this winter, it’s best to call before making those reservations. But if you plan on heading to the central or northern parts of the state, you can start driving south.

Will you be visiting the Sunshine State this winter?

Is the RV Boom Over? 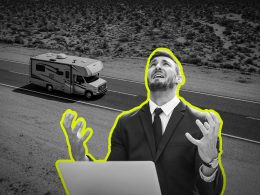 If you want to purchase a specific RV, it may feel like finding a needle in a haystack.…
1 share
1
0
0 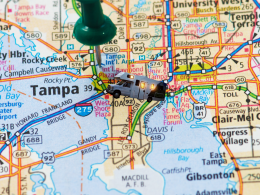 If you’re looking for an excuse to take a trip to the Sunshine State, the Tampa RV SuperShow… 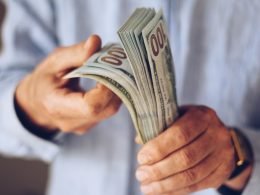 As more people get into RVing in recent years, dealerships are selling like never before. RVs are flying… 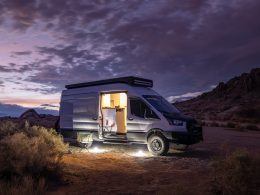 Winnebago’s EV Class B RV Is a Unique Concept

Electric vehicles have been trending in recent years. With charging stations popping up all over the country, manufacturers…