Home Blog Can You Stealth Camp in NYC?
View on YouTube

The Big Apple is an exciting place with its bright lights and millions of people. While you’ll find plenty of broadway shows and celebrities, you won’t find many campgrounds. Typically when this happens, nomads like Travel Beans will test their luck with stealth camping.

But can you stealth camp in NYC? Let’s find out and see how Travel Beans tackled this adventure thanks to a helpful tour guide in “Van Alley.”

What Is Stealth Camping?

Stealth camping is when travelers park in public places, typically side streets or parking lots. The goal is to park for several hours to get some rest without attracting negative attention.

Some states and cities are very inhospitable to camper vans and truck campers, which most people use for this camping style. Many cities prohibit overnight camping to combat trash and other unsavory activity.

If caught, violators often will need to leave and find a new spot but can also receive a ticket. The tickets typically cost more than a campsite, which sometimes makes this a risky situation.

HOT TIP
Find out if stealth camping is right for you, or if you should stick to campgrounds.

How Is Stealth Camping Different From Boondocking?

Stealth camping and boondocking are different camping styles. People stealth camp in a more urban environment and for short periods.

Cities or local municipalities may prohibit overnight parking, but not always. Stealth camping simply means parking in a public place and trying to draw as little attention as possible.

On the other hand, boondocking uses public lands, often in more remote locations. The Bureau of Land Management and the United States Forest Service manages thousands of acres of land designated for recreational use for the public. Many of these locations have established campsites, but some allow nomads to set up camp in any available space.

Who Is Travel Beans?

Alex and Emma, a couple of travelers from Britain, run the YouTube channel Travel Beans. They spent a few years backpacking and eventually landed in New York.

A battle with depression sent them back home to address the issue. However, after six challenging months, the couple wanted to head out for more travel adventures, including a stealth camping adventure in NYC.

They purchased a camper van in hopes of experiencing an incredible United States road trip. However, their dream trip went up in flames when their camper van caught fire. The couple ultimately purchased another camper van and will finally hit the road for their U.S. van life adventure.

What Is ‘Van Alley’ in NYC?

During their trip, Travel Beans got a bit of a guided tour of NYC’s Van Alley. Van Alley is a dead-end road in New York City that the city’s street sweeper can’t access.

As a result, the city doesn’t issue tickets to vans parked there. As Travel Bean’s tour guide said, “Every vehicle that you see that you suspect someone might live in — they do.”

However, the city has purchased the surrounding properties and plans to upgrade the area with a massive park. This ultimately means the days are numbered for Van Alley in New York City.

Stealth camping is very difficult in New York City and other major cities, as Travel Beans learned. The crowded and narrow roads mean you have very few places to park along the streets.

Many neighborhoods require permits and will issue citations to those caught parking without them. Popular vehicles used for stealth camping stick out like sore thumbs in parking lots and along empty streets in the middle of the night.

Stealth camping in New York City is often a gamble. You never know whether you’ll wake up in the middle of the night from a knock from law enforcement or find a ticket on your windshield. None of these are ideal situations and can be frustrating for those who want to spend time in the city.

Travel Beans didn’t want to make the same mistake twice and took their time selecting their new van. They take viewers with them in their video “Stealth Vanlife NYC” as they shop for their new rig. So which two did they tour?

The couple toured this Dodge b350 in Brooklyn. However, it was the same age and very similar to their previous van that went up in flames.

They visited “Van Alley,” where the seller stored it, and saw the upgrades that made it livable. Alex and Emma aren’t nearly as tall as the van’s original owner, so the height wouldn’t pose a problem for them.

The second van the couple checks out is in Queens. This Mercedes-Benz Sprinter van was self-converted. However, it wasn’t perfect for the couple and their needs.

It had a tall ceiling but no air conditioning. With the roof-mounted solar panels, it likely wouldn’t have enough room to add an A/C. The couple hopes to find something a little bigger that will better fit their needs.

Will Travel Beans Be Stealth Camping in NYC Soon?

While neither rig was their dream one, the couple will continue their search in hopes of stealth camping in NYC and other places. They plan to expand their search by using a friend’s vehicle to broaden their circle.

With so many possibilities, the couple is excited about the future. We won’t spoil the surprise, but the couple recently updated viewers with their stealth camper and hit the road. Go check it out!

Skeleton Coast: What's the Story Behind This Ship Graveyard? 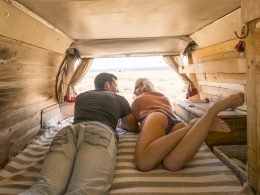 DIY Van Build Vs. Buying Class B Camper Van Motorhome: Which Is Better?

Are you ready to become a van lifer? The first step is deciding what type of van you… 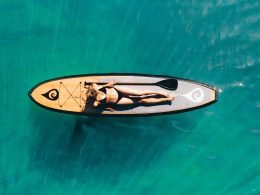 What Is the Open Roads Van Life Festival?

Nomadic life can offer plenty of adventures and out-of-this-world experiences. However, the road can get lonely, especially for…
27 shares
26
0
1 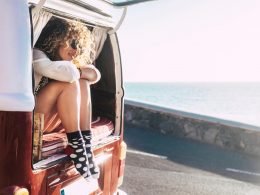 Is Van Life Cheaper Than Renting?

You’re tired of the skyrocketing rental rates. Paying $1,800/month for a one-bedroom apartment makes your stomach churn. But… 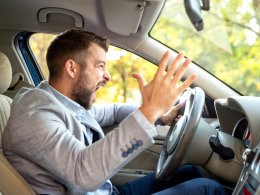 How to Deal With Aggressive Drivers

The road can be a dangerous, scary, and unpredictable place for many drivers. To stay safe while driving,…
10 shares
10
0
0